Gold has gone nowhere over the past five years. And it’s down 9.2 percent in the last six months.

But it’s been looking up lately. It’s up 4 percent in two months.

So what does this tell us about the market today?

How much higher can this bull market really go? A financial Ph.D. and former hedge fund manager with a following of over 400,000 says, “Much higher than you could ever imagine. And I can prove it.” On October 24th he’s hosting a free online event to show you exactly how much higher it can go… which stocks will soar… and the critical indicator that will tell you when to get out. We consider this a must-see for all Stansberry Churchouse readers. Click here to claim your free spot.

Gold generally moves opposite of stocks

As we’ve written before (here, here and here), gold is considered a hedge against falling markets and rising inflation – both of which have largely been absent in the last five years. So its underperformance isn’t all that surprising.

For a time, gold was also favoured by investors as a hedge against the U.S. Federal Reserve’s unprecedented quantitative easing (QE) programme.

But that bullishness faded in 2013 as sentiment towards the stock market (which competes with gold for investor attention) shifted to the upside… and the waves of cash from QE flooded markets.

Still, despite gold’s 35 percent decline from its September 2011 record high, it’s up 18-fold over the past 45 years in U.S. dollar terms. That’s a compound annual growth rate of 6.6 percent.

That’s better than a lot of stock markets. And it’s not far from the annualised S&P 500 return of 7.3 percent over the same period (not including dividend reinvestment).

But notwithstanding the similarity in their overall returns, gold prices have a low correlation to the S&P 500 index during times of market turbulence.

That means gold tends to move up when stocks are out-of-favour. For instance, gold tripled during the 1973 Arab oil embargo that caused the U.S. stock market to crash and the economy to go into recession.

Gold quadrupled in the late 1970s as inflation soared to double-digits, leading to then Fed Chairman Paul Volker raising prime lending rates to a historic high of 20 percent.

During the dot-com boom, gold fell out of favour, but came roaring back after the tech bubble burst and the U.S. economy went into a recession.

More recently, during the global economic crisis, the S&P 500 fell 56 percent from peak to trough between October 2007 and March 2009. Gold gained 25 percent during the same period. 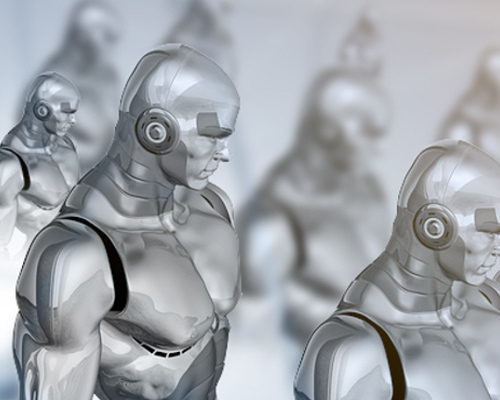 If you’ve lately ordered anything online, chances are the package that turned up at your doorstep was handled by one of the 100,000 “superworkers” that are fast taking over ecommerce warehouses.

As we reveal in our latest expose, these “superworkers” could lead to gains of up to 1,000% in a handful of technology stocks.

Go here to find out how.

Because of gold’s proven ability to hold its value, and even rise, during turbulent markets, it’s been used as one gauge of how expensive (or undervalued) the stock market is.

This is called the gold-to-S&P 500 ratio. It indicates how many ounces of gold it would take to buy the S&P 500 index at any given time.

The higher the ratio, the more ounces of gold it takes to buy the S&P 500 index.

The chart below shows that the ratio has hit three highs in the last 90 years. The first peak came in 1929, right before the Great Depression. The second peak came in 1971, shortly before the Arab oil embargo, while the third peak happened in August 2000, just before the dot-com bubble burst.

Where the ratio stands today

The ratio has been rising dramatically, from 0.67 times in August 2011 to 2.29 times today. That means the S&P 500 is becoming increasingly expensive relative to gold.

Why? A soaring stock market and a weaker gold price. As the market has risen 119 percent since August 2011, the price of gold has fallen 24 percent.

What this tells us is that, relative to gold, the S&P 500 index is three times more expensive than it was seven years ago… and is as expensive as it was in 1971 and 2008. So we may be nearing the top of the market.

At the same time, gold has also been gaining favour with investors who are becoming increasingly worried that the Federal Reserve may be raising interest rates too fast, endangering the current economic recovery.

This doesn’t necessarily suggest that U.S. stocks are headed for a fall. The S&P 500 could very well keep on rising on the back of strong economic numbers and rising corporate profits.

But we’ve said before that the U.S. market is trading at lofty valuations, particularly on a cyclically-adjusted price-to-earnings (CAPE) ratio. We’re into the 10th year of the longest-running bull market in history… and the powerful market force known as mean reversion will eventually take hold.

What does this all mean? It’s a good time to think about buying gold. We’ve said it before (here)… and it’s even more true now.